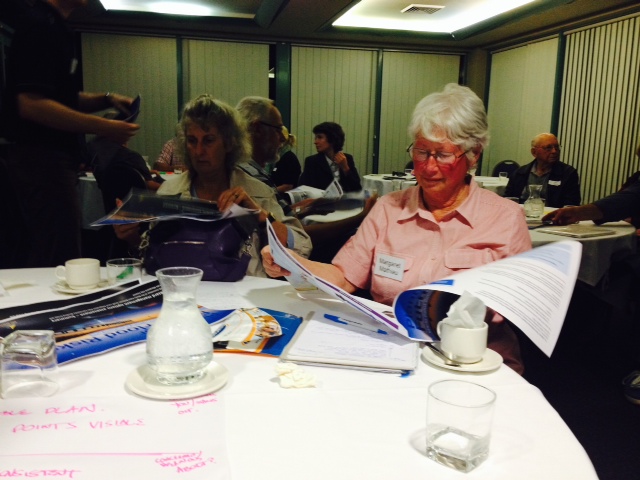 After several months of hard work, the sub-committee set up to assess and screen options for managing current and future flood risks, reported back to the wider Community Working Group on Thursday night.

Following a presentation from two sub-committee members, the working group were enthusiastic about the principles the sub-committee has identified for an Adaptation Plan.  The Community working group and Council’s Manager of Integrated Planning felt an important milestone had been reached.

“Collaborating with the sub-committee and members of the working group has proven to be really beneficial. We have a deeper understanding of the problems and solutions for Marks Point and Belmont South, and progress has been quicker due to the efforts of the sub-committee who have met on nine occasions,” Sharon said.

The draft strategy includes constructing seawalls to protect foreshore land from tidal inundation and erosion; filling land to maintain ground levels above the lake and water table; raising and improving the design of infrastructure such as drains and roads to match land filling; constructing new building with floor levels above projected flood levels; and, if necessary in the future, raising older homes above projected flood levels.  The timing of management options is based upon lake levels. As lake levels gradually rise, different management actions will be triggered.

Feedback from the working group indicated they were pleased with the collaborative approach taken in developing the draft strategy, described by the group as “clear and simple” and based on “logical trigger points”.

The Sub-Committee will meet again to finalise the list of management options that complement the adaptation strategy presented on Thursday night. A community newsletter will update the wider community on the progress made since early 2014.

Further community consultation will occur in early 2015 before the draft Local Adaptation Plan is prepared and exhibited. The exhibition period will provide an opportunity for all residents and ratepayers in the local government area to have their say.