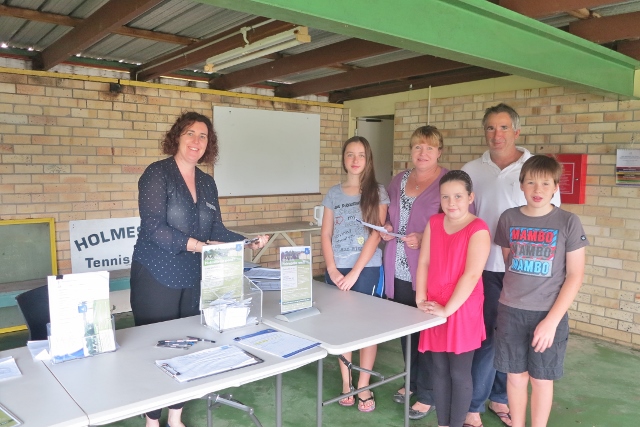 A number of residents from the Holmesville community braved the rain to discuss the future of the former Holmesville tennis court site last Saturday 2 May 2015.

More than 30 residents and members of community organisations came along to put forward suggestions for the disused site.

Community Development Officer, Emma Hawke, said the event was successful despite the weather and the dampened numbers of attendees.

“Holmesville is a close knit-community and many people at the event said they had been discussing the project with neighbours and other community members,” said Ms Hawke.

“It was great to see families joining Council to talk about what they would like for the future of this valuable community asset and how their children would utilise the site.”

“So far, the community has been really responsive with a number of suggestions already coming through, the popular ones include a children’s cycle park and a practical area for sports, barbecue facilities, community garden and Men’s Shed.”

There are still two weeks for community suggestions on the future use of the former Holmesville tennis court site, if you live in or near Holmesville and you want to get involved jump online at www.haveyoursaylakemac/Holmesville before Friday 22 May 2015.

Consultation has concluded for this stage of the project. If you would like further information please view the Communications and Engagement Report under Related Documents.