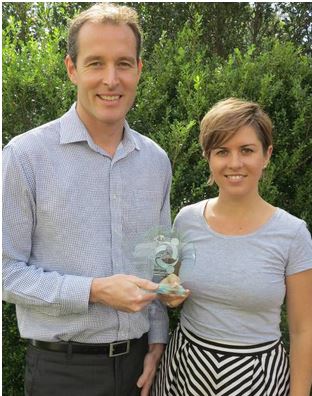 The Shape Your Future project asked Lake Macquarie residents what they valued about the city, and the vision they had for its future.

To prompt discussion on the topic, and to get locals to provide input, the Shape Your Future project used virtual reality animations to depict fanciful scenarios.

In one animation, set in the year 2050, a man on a hoverboard looked out onto Lake Macquarie to see a super-sized ferry rounding the wind turbines to drop off revellers at the giant waterslide, part of the new promenade entertainment precinct at Toronto.

While the animation was created for fun, it had the serious purpose of prompting locals to envisage big ideas about what was possible for the city, including such things as future power sources, expanded transport networks, and potential new uses for the estuary.

“Through the Shape Your Future project, council reached more than 170,000 people with more than 4000 participating directly in engagement activities that generated 1800 ideas and priorities for the City,” Mr Bell said.

“Through the use of innovative engagement techniques – from virtual reality to parklets, interactive mapping and involvement of futurists, along with our marketing strategy – we were able to reach as many residents as possible and encourage them to actively be involved in the development of a new vision and set of values for Lake Macquarie City.”

Shape Your Future won the award for Special Project Initiative.

Article written by David Stewart and featured in the Lakes Mail on 10 April 2017. Read the full article.